The Star: A Glimpse of the Cape San Blas Sunken Lighthouse

Special to The Star
This article first appeared in the "Panhandle Beacon" in June 2000. With renewed interest in the Cape San Blas Lighthouse, I thought it would be of interest to rerun this story with a few changes.
The 1980’s and 90’s were the “Golden Age” of diving. There were still virgin wrecks and reefs, plenty of fish, not as many fishermen, less rules, and inexpensive gas. Whenever the Gulf was calm and the weather good, I, my wife, Pam, friends Erik Tomlinson and Regina Capps would explore new dive sites—one was the third Cape San Blas Lighthouse.
We watched with subdued excitement as our depth recorder printed the silhouette of a large pyramid-shaped object rising from a depth of twenty feet to within a few feet of the surface. Being a half mile from Cape San Blas, I found it hard to believe that just a hundred years ago a proud lighthouse stood here surrounded by pine and palm forests and family or two of lighthouse keepers.
We had been here several times before, but each trip was doomed because the chocolate-colored Gulf had prevented us from diving. Today, with tides and currents in our favor, the water was an eerie translucent green; clean enough to dive but not enough to make it enjoyable. We gazed apprehensively over the side at the dark shadow just below the surface.
The iron skeleton tower that sits on the Cape today is the fourth tower to have been built here. It was preceded by three impressive brick towers that now lie far offshore. In fact the Cape San Blas lighthouses were not the first lighthouses in what is now Gulf County. The first lighthouse was built on St. Joseph’s Point on the end of St. Joseph’s Peninsula. (I use the possessive as the old cartographers used). It was finished in February, l839 for shipping to the ill-fated city of St. Joseph that stood where Oak Grove is today. It was only 45 feet tall. After the demise of St. Joseph in the fall of l841, the tower was abandoned.
Read more »
Posted by Roni Pridemore - A Tropical Breeze Owner at 9:12 AM No comments: 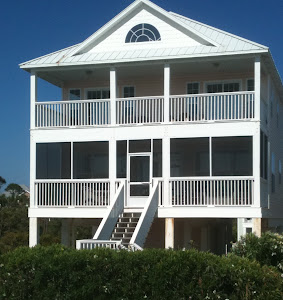